Always Play to Win, Never Play to Keep from Losing!

This short 3:37 video training is based on a quote I came up with a few years ago entitled…

“Always Play to Win, Never Play to Keep from Losing.”

In my 11 years of both studying and coaching top achievers one of the biggest trends I’ve found is that average people come to a crossroad or fork in the road where they are faced with potentially life changing decisions to play to win.

We’ve all heard the countless success stories of those who were faced with tough choices and approached a fork in the road and had to make a tough decision and instead of cowering back and leaning towards negative thinking patterns they instead decide to lay it on the line and “Be All In and Go All Out!” They believed that they need to play to win!

Many times these decisions were made on little or no facts and the individual had no track record of previous success in that area or opportunity, had no guarantee of the outcome, and many times chose to move forward even when people like their friends, family, co-workers, or people in their peer group said it couldn’t be done and they were crazy for trying. They wanted to play to win!

How an Entrepreneur Can Play to Win!

The difference between the person who ends up being the success story and the person who we never hear about is the fact that one took action and decided to play to win while the other one analyzed until they were paralyzed and played it conservatively and never took action hoping that would be the way to prevent losing.

Ironically those that think they can avoid “losing” by never playing, ultimately end up never accomplishing anything and therefore they rob themselves of the person they could’ve become and so they end up losing the biggest game of all… Life.

Think about it. If you were to take a second right now and think of something you have achieved that you are proud of, you could also probably look back to the moment and trace where that success originated from.

I’m willing to bet it originated from a decision you made when you came to a fork in the road where you had the choice to either listen to the negative voices inside your head that I call “The Weakness”, that was seeks to rob and steal you from the unleashing the greatness you have within, or you had the choice to Go for it, Lay it on the line, and Take a Chance on yourself. Play to win! 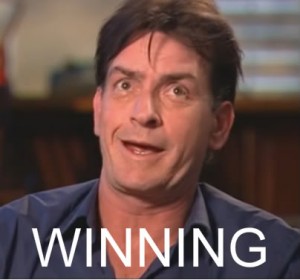 Stop and Think About Why You MUST Play to Win!

Seriously… Stop, Think, and Ask Yourself “What is something I have accomplished or achieved that I’m proud of today and what triggered that achievement?

What was your mindset? You probably took a risk, you probably Went for it and played to win.

Nothing of greatness happens without taking action. Whether you were feeling scared or confident you probably took action, did the thing despite the fear and set your mind to “Play to Win.”

If you’ve ever heard of or studied The Law of Attraction you’ll know that you attract what your thoughts dominantly focus on.

If you focus on “Not Losing” The Universe doesn’t hear the word “not” it only hears and attracts the dominant thought which is “losing” and so you will lose.

If you focus on “Playing to Win” the dominant thought you are attracting is “Win” and so you will win.

The Law of Attraction is as simple as that. So if you want to win in life, approach every opportunity with the “Always Play to Win and Never Play to Keep from Losing” mindset and success will be sure to follow.

You only live once, so Take big risks, Be all in, and Go all Out, and I’m sure I’ll be hearing your success story soon!

(The above video you saw of me speaking was a snippet of a 50 minute training I recently conducted at the No Excuses Summit in Las Vegas, NV.

If you are interested in seeing my complete training along with 17 other top speakers full stage presentations, please note that they have recently pulled down the DVD set they had for sale.

However, I can still put you on a waiting list and if it ever does come back on sale, I’ll let you know. =) Message me directly, via Email, Facebook, or Twitter and let me know if you’re interested.)

Have a great day and always remember to “Always Play to Win, Never Play to Keep from Losing.”